The commercial vehicle retrofitter Quantron has announced the Energon, a 44-tonne fuel cell truck with a range of around 700 kilometres. The vehicle can be ordered immediately, and deliveries are to start next year.

The 130 kW fuel cell system used feeds the 340 kW motor with support from an LFP battery with a capacity of 110 kWh (cell supplier of Quantron is CATL). The powertrain still has a two-speed transmission. The Iveco Strator long hood truck serves as the base vehicle. Quantron announced in the notification that the Energon could be “fully integrated into the logistics processes”.

According to the company’s information, it is now accepting advance orders. Serhat Yilmaz, Chief Marketing Officer of Quantron, confirmed to electrive that the company could deliver “until the end of 2021”. According to the recent announcement, however, series production is not scheduled to start until mid-2022.

The company also claims a price advantage of up to 10,000 euros is possible with advance orders. But Yilmaz does not want to name prices for the Energon. “The customer inquiries are already there, and we calculate them specifically according to the individual requirements,” says Yilmaz. “Because, of course, the price always depends on various factors.” To lower the entry hurdle of the initially higher investment costs for electric trucks, the company is also working on an offer to provide the vehicles including the infrastructure and driver – referred to by Yilmaz as “Quantron as a Service”.

The Energon is not to remain Quantron’s only fuel-cell model for long. The company is “working hard” on further electric vehicles and models to be able to offer “a wide range of fuel cell solutions for companies and local authorities” shortly. 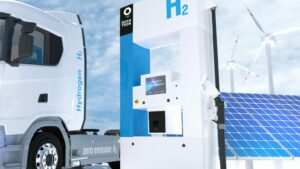